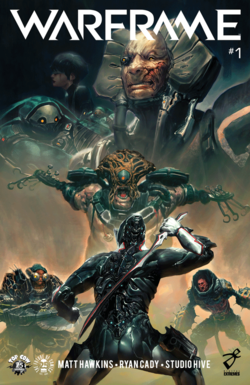 GHOULS: Part One is the first issue of the WARFRAME: Ghouls graphic novel series. A joint project between Digital Extremes and Top Cow Productions, the comic depicts an

The original Convention Edition, depicting only the first 22-pages, was released in June 2017 as an exclusive merchandise to the ticket holders for the 2017 TennoCon, though it is now freely available.

The plot begins with a Grineer army unit led by Captain Vor raiding an Ostron village, intending to scavenge any Orokin artifacts left in the vicinity. Unable to find any, the raid unit deems the Ostrons rebelling against them and immediately executes them one by one, destroying their homes and settlement.

Following the ensuing genocide, an Excalibur Warframe arrives to fend off the Grineer raid and nearly forces them into retreat. Yet, despite the tide of battle turning, the Excalibur chooses to save an Ostron child from danger instead of continuing the fight.

After hiding and tending to the child, the Grineer soon return with their never-before seen Ghouls to capture the Warframe – dead or alive. The Excalibur is eventually overwhelmed by the continuous onslaught of the Grineer army and their ghouls, prompting the Lotus to seek the assistance of a fellow Tenno for reinforcements,