永冻晶矿前线 is an 活动 introduced with 更新 14.5 as the start of a new mission type that will be replacing all 生存 missions that take place on a terrestrial tileset (Survival missions not in space). It started Wednesday, August 27 and ends Wednesday, September 3 at 12 PM EDT. In this event, Tenno are instructed follow intel the Lotus provides in order to locate artifacts hidden underground.

What You'll Need to Do

Note: Each player must unlock each mission with their own personal best score. One player cannot taxi another to missions which both have not unlocked via their personal bests for this event

What You Need to Know 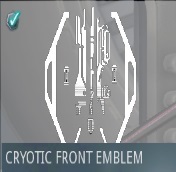 When an Excavator timer reaches zero, you will receive an amount of 永冻晶矿 based on what planet you're on (100 for Earth, 200 for Phobos, 300 for Europa). You will receive a partial amount of Cryotic (not the maximum for the planet) if an Excavator is destroyed before its timer reaches zero. The more Cryotic you earn, the better the Reward – so dig on!

Note: The basis for the rewards is your best score in one single run.